Spin Art {With Paint and Glitter}

Spin Art {With Paint and Glitter}

Spin art is one of those art experiences that is just so magical. There’s a certain sense of unpredictability that makes it so exciting and just when you think you’ve created the best one yet, the next one surpasses it. I tend to think of spin art as a bit of a mix between shaving cream art and symmetry painting. Sound like fun? It is! Read on to see all the fun we had as well as our tips on how to minimize the mess so that you can maximize your fun. 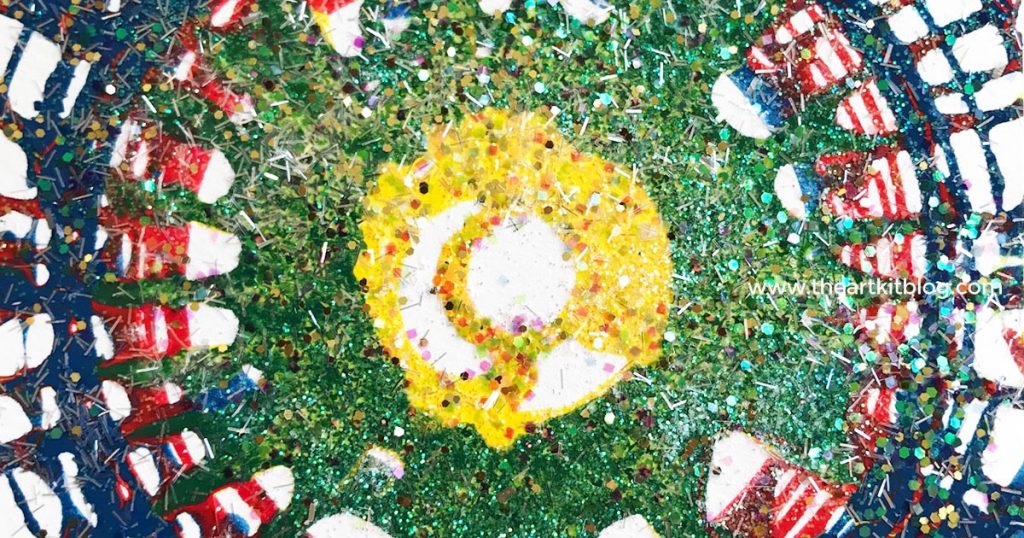 Affiliate links have been included for your convenience. Please see our full disclosure if you’d like more information.

Begin by gathering your materials and prepping your workspace. Before we even opened our paint bottles, we taped a piece of parchment paper to a cookie sheet so that we would have a place to let our spin art masterpieces dry. What we love about using parchment paper is that the paint-laden paper won’t stick to it as it dries. Also, before you start, we suggest writing your child’s name and age on the back of the paper. That way, after they’ve made their masterpieces, you will know who made it (especially if you have more than one child) and when it was made. We’ve found that if we wait until after the artwork has been made and dried, we are much less likely to write their name and age on the back and then we end up kicking ourselves because time goes by and then we can’t always remember exactly when they made it.

Okay, so now that we’ve given you a few tips on getting started, let’s actually get started! 🙂 We purchased a spinner by Alex Toys and were really happy with how easy it was to use. The first aspect we loved about it was that it didn’t require any batteries. It has a handle that you squeeze which causes the wheel that holds the paper to spin. We were actually quite surprised at how easily it was to make the spinner rotate at such a fast speed. The spinner also came with four different colored paints in squeeze bottles that were easy to squeeze and made the process even easier.

We debated about using our salad spinner but the thought of having to wash the paint out of all the nooks and cranies of it left us shivering. So, instead, we researched art spinners and decided on a spinner by Alex Toys and we were really happy with how easy it was to use. The first aspect we loved about it was that it didn’t require any batteries. It simply has a handle that you squeeze which causes the wheel that holds the paper to spin. We were actually quite surprised at how easy it was to make the spinner rotate at such a fast speed. The spinner also came with four different colored paints in squeeze bottles that were easy to squeeze and made the process even easier. 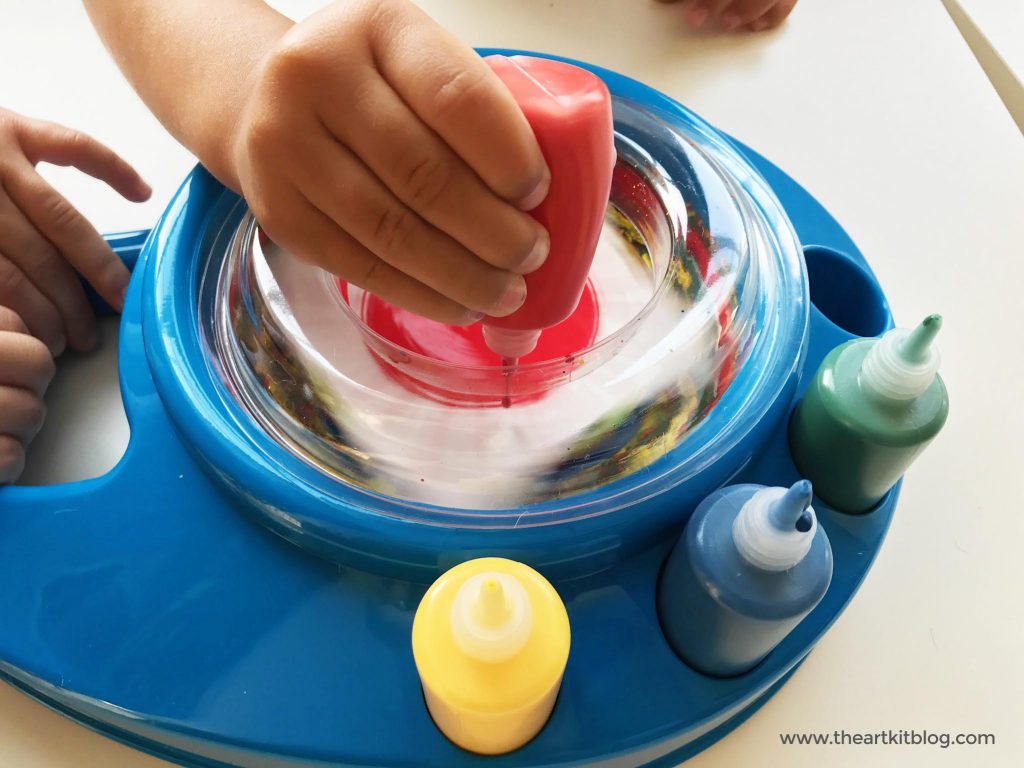 In addition, several pre-cut sheets were included and while there wasn’t necessarily anything wrong with them, they were a little on the thin side, which meant we had to remove them from the spinner very carefully to avoid ripping the paint-soaked paper. After using a few of the included sheets, we decided to use our own watercolor paper and liked that it was a little sturdier. Even with the thinner paper though, we would most definitely recommend the Alex Toys spinner as it was easy to use and very reasonably priced.

We also really loved the splash guard. To be honest, I wasn’t sure how messy this activity was going to get but the splash guard stayed in place and kept the paint in the spinner. We did keep a few baby wipes and paper towels on hand though, to wipe the spinner plate in between paper changes. 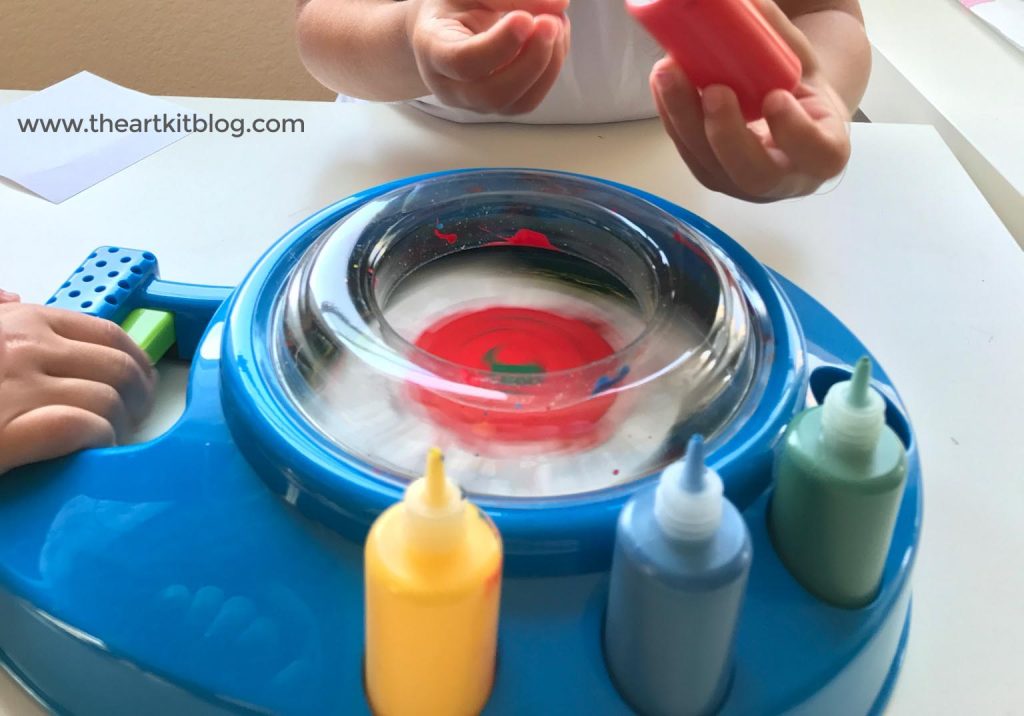 Since the kids both wanted to try the spinner first, we ultimately decided that one would squeeze the paint and the other would squeeze the handle to make the spinner spin. This worked well and they had a blast! They kept saying, “just one more,” but of course as soon as they finished the piece they were working on, they wanted to make another. 🙂 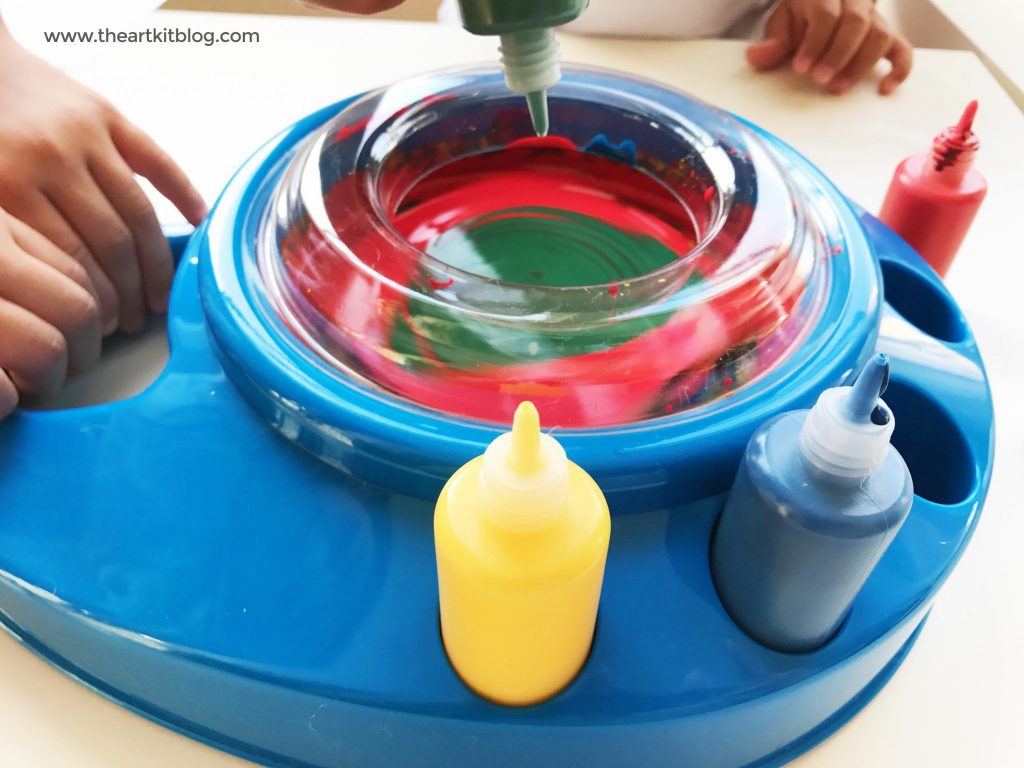 After making a dozen or so spin art masterpieces, we decided to sprinkle a little (okay, a lot) of glitter on the wet paint. You can omit this step if you’d prefer but the kids really loved this part. 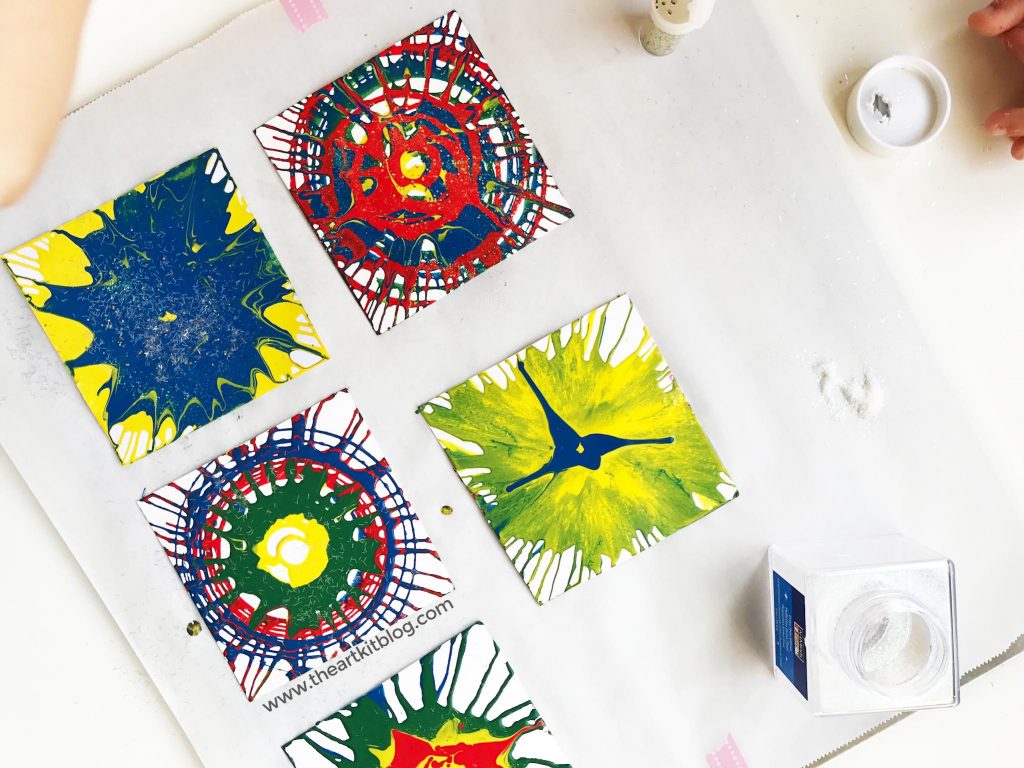 We simply sprinkled the glitter on the artwork that was already on the trays and then allowed them to dry. 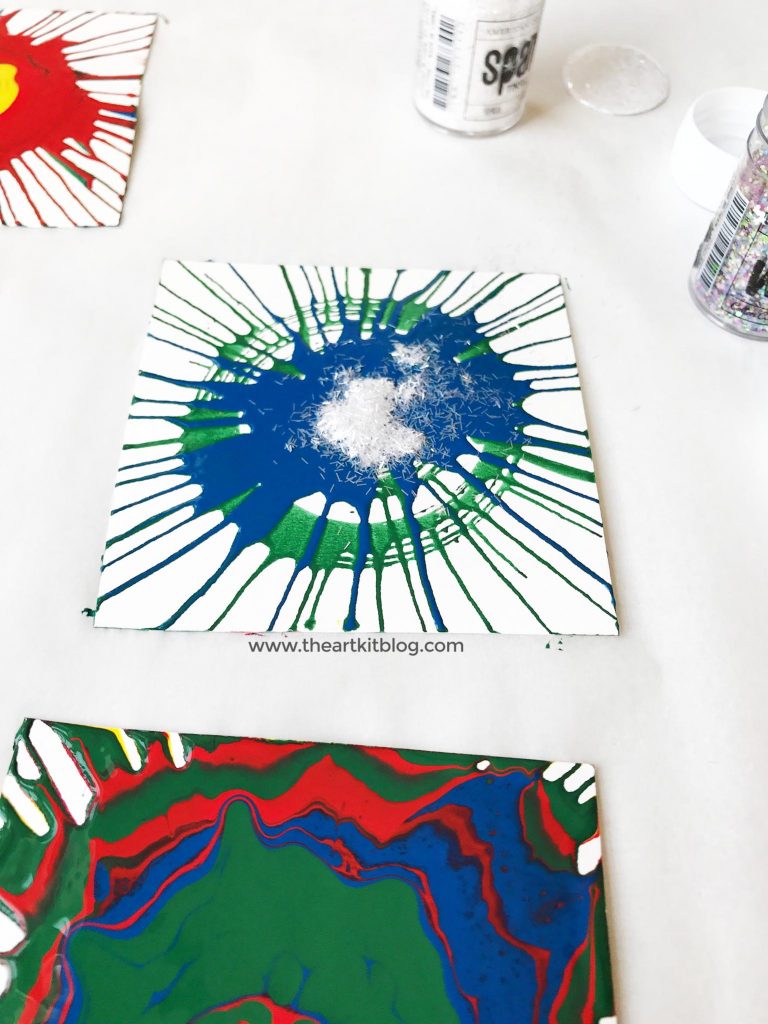 We were really happy with how they turned out. Miss L declared she was going to frame one of hers (the one with the yellow background and blue in the middle – shown a couple photos above) and that it looked like a ballerina to her. 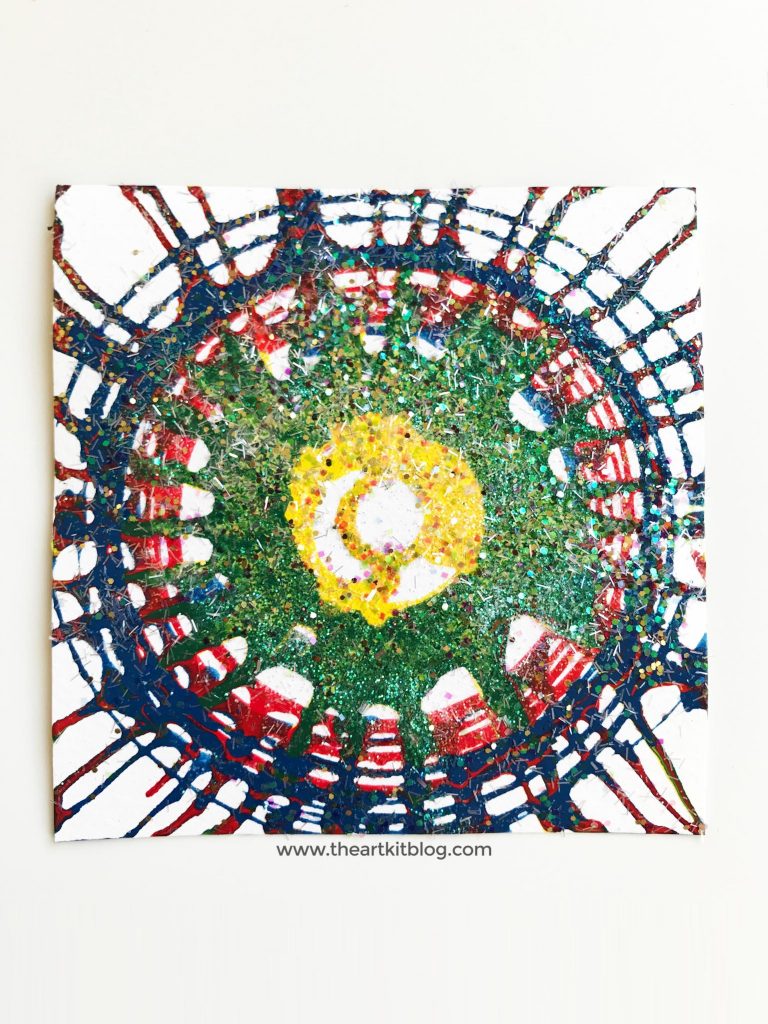 That’s it! While it may seem intimidating at first, it really wasn’t as messy or as difficult as we first thought and the kids (and I) really had a blast. It was actually difficult to stop because we were having so much fun!

Have you made spin art before? Let us know in the comment section below.

If you’d like to save this for later, please share it on social media. Or, pin it for later here. 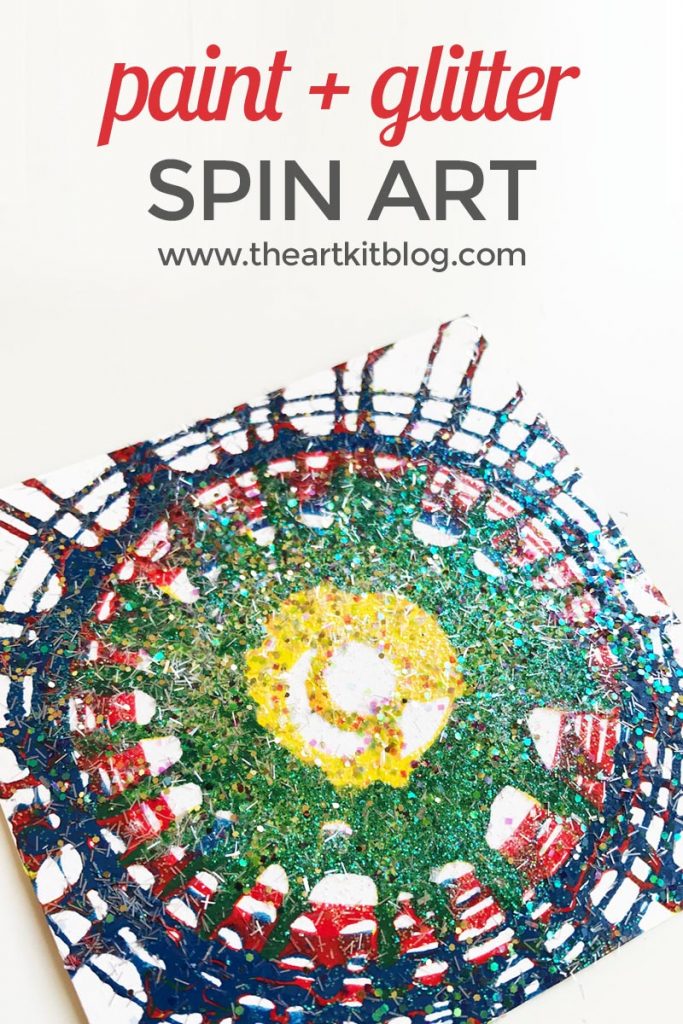 Want more? Be sure to check out some of our other fun activities:

We use cookies to ensure that we give you the best experience on our website. If you continue to use this site we will assume that you are happy with it.OkNoRead more
Revoke Cookies